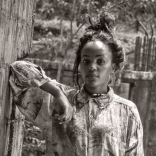 Dorothy Nankabirwa has farmed her 1.2 decimal piece of land for close to two decades. But like most farmers in Lubanja village, Busimbi Sub County, in Uganda’s central district of Mityana, field productivity has waned with each ending season.

Nankabirwa grows maize, bananas and vegetables in a mixed gardening set-up, for both food and household income. Until recently, a cocktail of bad weather patterns, and erosion had made the area’s rocky soils lifeless.

“The biggest challenge is that our soils are really poor. They are rocky and many other farmers are finding it hard to produce enough food for consumption and income. This together with bad weather had made agriculture unproductive,” Nankabirwa explains.

She is now part of a growing group of farmers who have been inspired by a local organic agricultural research centre to rejuvenate the soils using rudimentary practices.

“The last two seasons alone have been very different. My harvest has been improving. I sold more vegetables and coffee than ever before,” she narrates.

Called agroecology, the practice seeks to develop interdependence between annual and perennial crops, livestock and aquatic animals, trees, soils, water and other components in the gardens to enhance synergies in the context of a rapidly changing climate.

Rural Community in Development (RUCID), the pioneer of the practice, says mixed cropping and the soil micro-organism interdependence is a traditional African farming practice but was discarded decades ago for modern agriculture.

The traditional African farmer used soil coverage practices like mulching to enhance ecological functions, leading to greater resource-use efficiency and resilience in his garden, and this kept climate change and its effects on agriculture in check according to Samuel Nyanzi, a lead trainer at RUCID.

“Agroecology looks at animals and crops as well as micro- and macro-organisms together as one. Each organism on the farm should benefit the other,” Nyanzi says adding that farmers are now being taught that productivity and soil fertility depends on how active soil microorganism is.

About 600 meters from Nankabirwa is another farm, owned by Elisa Sebadduka. He has set up vermicomposting where through a simple process, animal litter is converted into humus and organic fertilizer.

“My animals feed on grass from this land … I collect their excrement into composite and take it back to the farm. This improves soil fertility and boasts my yields. It is opposed to just taking away from the soil and watching it lose its texture,” he explains.

Sebadduka on a daily nets a liquid bi-product of red earthworms’ digestive excretions and aerobic decomposition and it has aided his coffee, fruits, cassava and bananas to co-exist productively.

“Very many scholars say coffee and mangoes cannot coexist on the same farm. but through organic agroecology principles of integration and management, the coffee plants and mangoes are living together in harmony on this farm,” he says, referring to his mixed farm which inhabits coffee, fruits and bananas.

The Uganda National Bureau of Statistics (UBOS) estimates that 70% of Uganda’s working population is engaging in agriculture. However, over 46% of Uganda’s soil is degraded, of which, up to 10% is severely damaged and unproductive, according to the National Environment Management Authority.

The degradation contributes to up to 12% loss in the country’s Gross National Product according to UBOS. Experts have argued that agroecology would pay attention to the design of diversified systems that selectively combine annual and perennial crops, livestock and aquatic animals, trees, soils, water and other components on farms and agricultural landscapes to enhance synergies in the context of a rapidly changing climate.

“The beauty of agroecology looks at animals and crops as well as micro- and macro-organisms together as one. Each organism on the farm should benefit the other,” Nyanzi notes, alluding to the success the centre has made in different communities.

RUCID has thus rolled out sustainable and environmentally friendly food production training programs where they are helping farmers to revalue the region’s infertile soils that are becoming a breeding ground for pests and diseases.

“Farmers were taught that productivity and soil fertility depends on how active soil microorganism is. when they are active, the fertility is okay and vice versa,” says Nyanzi.

Soil microorganisms can be classified as bacteria, fungi, algae protozoa and actinomycetes, all of which are unique and important in maintaining soil fertility in their different functions.

This means that preserving the microorganism requires less reliance or a complete shift from lab synthetic fertilisers such as NPKs, but this is knowledge most farmers would have no complete access to.

Yet vermicompost, as produced by Sebadduka produces a rich organic soil amendment containing a diversity of plant nutrients and beneficial microorganisms.

“At this point periodical mixing of the compost to redistribute the worms and allow more to be produced to feed on the husks and dung is required,” says Sebadduka.

Nankabirwa doesn’t own livestock. But the system of interdependency allows her to exchange with other farmers like Sebadduka fodder for dung which she converts to her farm usage.

“Some of my neighbours have cows, so I give them the remains of the maize after a harvest and they feed their cows and in turn, they give me cow dung for my vermicompost,” she said.

Instead of relying on tilling, regenerative farming practices focus on keeping the soil covered with vegetation and natural materials through cover crops, pastures and mixed farming does this well, according to Nyanzi.  on his demonstration farm. Weeding is by hand picking.

To enhance the organic farming movement within the Mityana district, the office of the district productions officer also conducts holistic agriculture training for rural farmers to continue producing for the region and beyond in the light of climate change.

“As a district, we are training the farmers about the effects of climate change and how they can address them, we have encouraged them to have water conservation ponds, practice mulching and also do field contouring,” says Namayanja Annet, the district production officer for Mulela sub-county.

Beyond soil restoration, the practice has improved incomes and provided households with organic foods that have cushioned many families from consumption of intoxicated farm produce.

Other than restoring soil health, environmental benefit, improved food security and crop production Sebadduka sells off most of his farm products like milk, coffee and more into the local market to be able to take care of his farm and family.

Not a bed of roses

Not all is rosy the agroecology movement is facing scrutiny at different levels. farmers have expressed concerns in regard to the cost of running a purely organic farm. For many that do not have the facilities to make their own vermicompost, buying the bio-stimulus comes at a high price.

But also, the confusion within the communities has hindered many from transitioning into this practice.

Nyanzi expressed concerns over the diversion of their trained farmers. He says many end up not practising organic agriculture due to the varying opinions in the community that question the viability of the practice.

“Until they come to the demonstration farms and see the collard greens  (Sukuma wiki) planted in a mixed plan thriving better than the ones on a single plan, many will remain cynical,” says Nyanzi.